FRIENDS OF THE PARAGON
​Zacharias Simos, eldest of four children of Theodore Zachariou Simos and his wife Areanthe (nee Ttheodorokakis) was born in the small village of Kousounari on the Greek island of Kythera on August 15, 1897.

Zacharias Simos migrated to Australia in 1916 at the age of fifteen.  He spent some time in Tenterfield, NSW, where he would have been aware of the reputation of fellow Kytherian, John Comino, who had built a successful restaurant business in Sydney, popularising the ‘oyster bar’concept.

By 1915, showing a spirit of enterprise and dedication to hard work that would characterise his life, the then eighteen year-old opened his first business in George Street Windsor, NSW.  The Windsor and Richmond Gazette of Friday December 3, 1915 reported that:
“Z. Simos and Co., proprietors of the dining and refreshment rooms, George-Street, Windsor, are now well established and are up-to-date in every department.”
The December 17, 1915 edition of that publication carried the following advertisement: 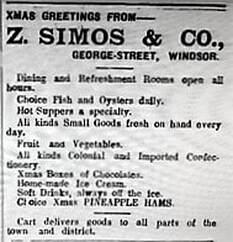 By 1916, the then nineteen year-old Zac, or Jack, as he was then commonly known, had moved to Katoomba and leased former tea rooms at 65 Katoomba Street, renaming it as The Paragon Cafe and Oyster Bar.  An advertisement for his new venture appeared in The Blue Mountains Echo on September 15, 1916: 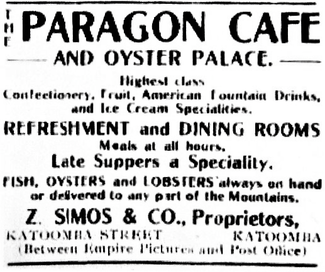 Between 1916 and 1921, Zac extended the small cafe and opened a private dining room at the rear (probably the Oak Room, now a vestibule serving the later, magnificent  Art Deco additions).   An advertisement from December 1921 indicates the willingness to change with popular demand, identifying The Paragon as “sundae and candy shop” and promoting the new dining room for private parties and functions.

Zac had  rented the premises until December 1924, when he purchased the freehold, also purchasing the adjacent shop at number 67.

In 1929 he undertook an extensive tour of Europe, investigating the latest trends in cafes, confectionery, packaging and merchandising.

While visiting his home island of Kythera, Jack met Mary Panaretos, daughter of American restaurateurs.  They subsequently married on January 30, 1930, before settling in Katoomba later that year, where Mary soon became the familiar face running the ‘front of house’ at The Paragon.

As the business continued to prosper, Jack enjoyed many interests, despite remaining an ever-present force behind its success.  The Australian Dictonery of Biography records:  “(Jack) devoted many hours to his garden….loved music and played the violin, was a keen fisherman and backgammon player”.

Zac Simos was a young man with extraordinary vision who pursued his dream with incredible passion. He contributed greatly to the community through his generosity, supporting many charities. He was a loyal supporter of Rotary for many years and was also involved in the Chamber of Commerce. 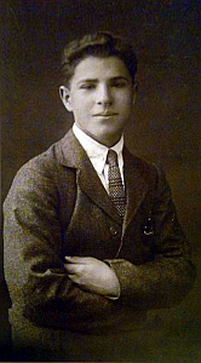